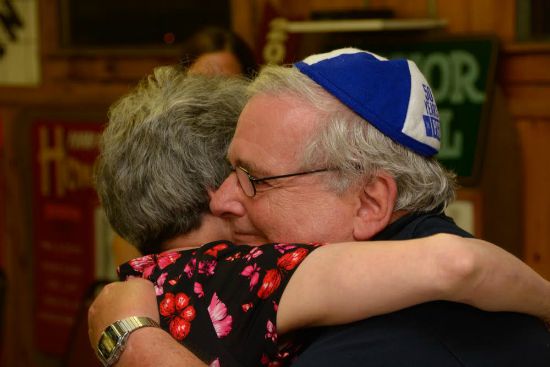 At lunch today Ken asked Paul if he would like to address you tonight. Paul replied that he probably would become too emotional to do so. So, as a surprise to him, I’ve volunteered to speak briefly on his behalf.

Tonight’s banquet marks the end of an era at Camp Avoda – the era of 50 years of PGD. It is going to be a very emotional night for Paul because during his 50-year tenure, while board members and other administrative personnel and general staff have come and gone, and the camper alumni rolls have grown, and the programs have been enlarged, and the facilities have been improved, Paul has been the one constant – the one person – everyone could count on to be there on opening day and at the closing banquet and also throughout the other 10 months of the year. As that constant, Paul has given name recognition to Avoda within the Jewish camp community and beyond. He has also provided a stability to Avoda that is remarkable, historic, and mostly unmatched by any other camp’s director.

Twenty-five years ago when we celebrated Paul’s first quarter century right here in the mess hall on August 5, 1990, I spoke about his many contributions to Avoda. I also explained what it takes to be a camp director. I’d like to paraphrase what I observed about Paul then and now.

To direct a camp requires strong leadership abilities, a desire to work with children, and a respect and love for the values and traditions of a camp experience. It presupposes the ability to give of oneself in all respects, often 24 hours a day. It necessitates a diverse set of both financial and people skills, as well as the training, sensitivity, and conviction to apply them. It also requires the patience and strength of character to be accountable to a board of directors, to parents, and to the public at large. Finally, it also requires the flexibility to accept change.

The change for Paul tonight will be huge and difficult. But over the past eight summers, with oversight by the board of directors and under Ken’s very capable leadership as camp director, Avoda has been undergoing a foresighted administrative change, with Paul as an active member of the transition team. This summer as he exits Avoda, Paul will change roles but remain connected and involved in planning as a board member. I want to thank the board, Ken and Jill, and all of you for accommodating this change with such graciousness and respect for Paul and for me. Avoda, you’re in very good hands as you enter a new era in 2016, and I know you will all return next year with the same enthusiasm and spirit.

We invite you to tour Camp Avoda this summer!
See the facilities, meet our staff, and see for yourself why campers keep coming back.